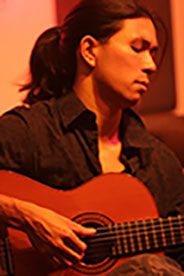 “Bicultural Music Samurai” Goh Kurosawa resides in Los Angeles and travels the world, playing his 'tap/slap' guitar with a repertoire of original songs of acoustic rock jazz, electrifying soundscapes, and stunning arrangements of familiar global melodies. Goh has actively toured locally and internationally since 2005. Having performed in a wide range of settings and festivals he performs fifty plus live shows in Japan annually, produces Brilliant Strings in Los Angeles quarterly, conducts workshops/seminars at universities and schools regularly, and has performed featured concerts in Taiwan, Brazil, France, Canada, and Mexico.

Goh truly lives the principals of MYMAGO in all the ways he gives back to his community. His volunteer roster includes organizations such as the Creative Arts Group in Sierra Madre, California; TYME Foundation; The Boys and Girls Club; and L.A. Musical Artists Uniting to Help Japan among others.

Jeannette Thompson, who nominated Goh for the Alumni Achievement Award, states “(Goh) is highly creative, sharing himself and his impression of life through music. He loves to teach and share his passions with anyone he meets. Goh is a wonderful example of how your early experiences shape you. What a testimony to Wilson that he has achieved so much with such a zest for life”.

Keith’s son Matthew states, “Wilson School prepared Keith Naunheim to be a pillar of the community. As a physician, he is caring and empathetic to his patients. He has worked 7 days a week, 50 weeks a year for the past 30 years to make sure that patients with complicated surgical problems get taken care of with empathy and compassion. He is routinely recognized as one of the most prominent doctors in St. Louis, and has taken on the cause of treating the sickest people - especially those without adequate insurance … his devotion to caring for individual patients is perhaps the most awe-inspiring thing about Keith - he checks his ego at the door and listens. I think his teachers at Wilson would be proud to see that Keith is one of the best doctors - and one of the best people - in St. Louis”. 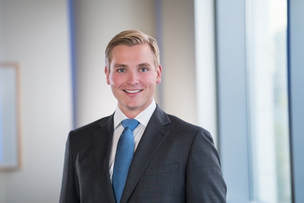 When Turner Holthaus (CO '01) was six years old, he knew that he wanted to be “an Army man” when he grew up. Turner never lost sight of this vision. After graduating Wilson Turner went on attend MICDS, and next West Point where he graduated in the top 15% of his class.

His two tours of duty in Afghanistan and assignments in Africa and Cuba saw him rise to the rank of Captain, earning the Bronze Star for battlefield initiatives in the process. During his active duty, Turner studied at the University of Lille in Lille France. But, his education did not stop there. Today Turner is continuing his studies at the MIT Sloan School of Business, from which he anticipates graduation later this spring.  Turner continues the Wilson tradition of Making Your Mark A Good One, most memorably for him as a mentor to a young boy through Big Brothers Big Sisters. 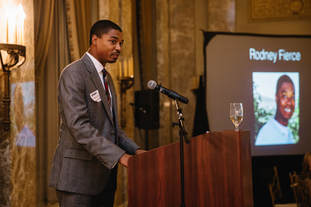 Rodney DeaVault Fierce (CO '97) was taught early in life to never stop learning new things, a lesson that stays with him today. After leaving Wilson to attend St. Louis Priory School, Rodney went on to Princeton University where he discovered a love of Children’s literature.

​Perhaps it was his grandmother’s lesson that literature will take you all over the world if you let it that influenced Rodney to leave a job in New York City’s world of corporate law to devote his life to bringing the joy of literature to others as an English professor. His Master’s in Children’s literature from Simmons College led to Rodney’s PhD in English from University of Southern Mississippi. A frequent guest speaker and lecturer, Rodney’s work has been presented at WonderCon, The Pop Culture Association and Children’s Literature Association Conference.Rodney graduated from The Wilson School in 1997. 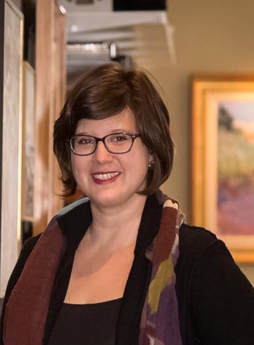 In 2003, she graduated with a degree in English from Yale University. In 2008, Katie moved to Boston to get her M.F.A. in Creative Writing at Emerson College. Her thesis, a poetry manuscript titled "The Speed of Skin," was a nominee fro the Dean's Prize and earned a commendation from the Academy of American Poets.

Since 2010, Katie has taught creative writing, composition, research writing, and rhetoric at various secondary and higher education institutions including Emerson College, Roosevelt University and St. Paul's School. She has also led poetry workshops at the Cambridge Center for Adult Education and the Newberry Library. Currently, she is a Visiting Assistant Professor at the University of Wisconsin in Eau Claire.

As a freelancer, Katie has contributed to the "Minneapolis Star Tribune," "Time Out New York," "Time Out Boston," "Time Out Chicago," "Role Reboot," and Smithsonian's "The Torch". Her poetry has appeared or is forthcoming in a number of journals including Poetry Quarterly. She hopes to publish her first book of poems in the near future. 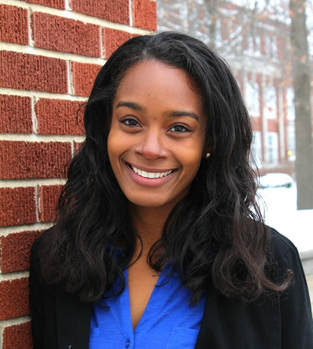 Amber graduated from The Wilson School in 2007 and from Westminster Christian Academy in 2013.

Amber is currently a senior at Truman State University, studying broadcast journalism. Since starting at Truman, Amber worked for the campus new station, working her way up to holding positions as a reporter, anchor, videographer and producer. During her junior year, she launcher her own talk show entitled "Rising from our Roots," which she wrote, hosted and produced. She currently serves as executive producer.

Amber participated in the Alpha Phi Alpha Black and Gold pageant, in which she was crowned the queen. She spent a semester abroad in San Jose, Costa Rica at Universidad Veritas and created a documentary about her experience. She has volunteered for Convoy of Hope and the St. Louis Area Food Bank.

Following her college graduation, Amber plans to pursue a master's degree in public relations.Amber graduated from The Wilson School in 2007 and from Westminster Christian Academy in 2013. 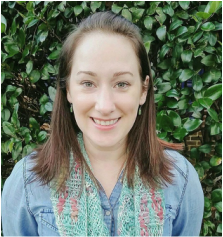 Margaret graduated from The Wilson School in 1997 and from Crossroads College Preparatory School in 2003. Her college
background includes earning a Bachelors in Science in Psychology
& Neuroscience in 2007 from The College of Charleston, Charleston South Carolina and a Masters in Public Health from Washington University in 2011.

Margaret is currently a PhD student and Center for Geospatial Analytic Student Fellow focused on the built environment and its impact on overall health at The College of Natural Resources, North Carolina State University, in Raleigh, North Carolina. Margaret has authored and co-authored several articles and reviews. In addition to her numerous educational accomplishments, Margaret is the co-founder and Treasurer of The Yantalo International Volunteer Organization, the first environmentally sustainable medical clinic in Yantalo, Peru, currently under construction. 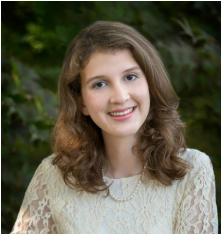 Victoria graduated from The Wilson School in 2009 and from John Burroughs School with academic honors in 2015. While at Burroughs, she excelled in science, music and drama activities, as well as being an
outstanding scholar. She was a National Merit Scholar and an AP scholar, among her other awards. She was awarded the Baker Scholarship at Davidson College, a four year selective academic scholarship awarded to one incoming freshman each year.

Victoria exemplifies the value of a Wilson School education. She thrived at Wilson, which prepared her for the academic and personal  challenges of high school and college. She accomplished all of this as a cancer survivor.